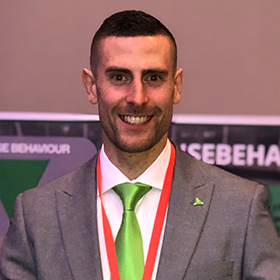 Following achieving an honours degree in sport and culture in 2006, Peter Thompson began in education as a teaching assistant in 2008.

After entering mainstream physical education in 2011, Peter suffered with depression, finding intense gym training and skipping to music as a coping mechanism.

In 2012, he joined the world of behaviour and inclusion, developing a unique approach to support behaviour.

In 2017 the skipping led Peter to accomplish a Guinness world record for the most skipping rope crossovers in 60 seconds, amplifying the the 33 year olds message to young people, of control and positive attitude leading to success.

Exercise Behaviour – Introducing a unique approach that has reduced exclusion by 95%.

Exercise Behaviour – Introducing a unique approach that has reduced exclusion by 95%.