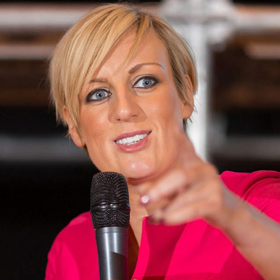 For over a decade Steph McGovern has reported on business and finance from around the world; from international summits to small business success stories. She is an established part of the BBC Breakfast team, covering business developments daily, and also regularly taking to the sofa as main co-host.

During the financial crash Steph was the lead producer of financial news, working with then Business Editor Robert Peston at the forefront of the award-winning coverage of the credit crunch and banking crisis. She soon began broadcasting herself, and Steph has presented on 5Live, Radio 4 and on the Chris Evans show on Radio 2. Steph’s Breakfast duties include meeting first-hand those on Britain’s business frontline.

Speaking to factory workers and FTSE 100 CEOs, Steph’s mission is to uncover and explain what’s going on in the real economy.

Taking business away from news coverage Steph launched her own CBBC show looking for the next generation of entrepreneurs, Pocket Money Pitch. In Made in Great Britain she joined 21st century makers exploring the skills and industries that built the nation in years gone by.

She is also the co-host of the BBC One show Shop Well For Less and the consumer rights institution Watchdog. And as well as appearing as a guest, Steph has also hosted Have I Got News For You.
Off-screen Steph is also involved in BBC community projects such as BBC Outreach and BBC School Report. She is a mentor for young people in her native Teesside and regularly runs workshops for schoolchildren around the North East, as well as being active in areas around education and apprenticeships. A former champion Irish dancer she still keeps her foot in, often attending international competitions, where she helps to coach dancers.