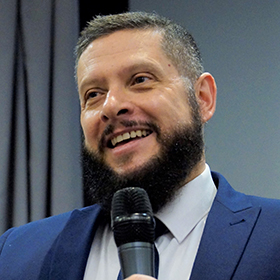 Shaun Dellenty is an independent education trainer, ex school leader and improving schools consultant  and inspirational keynote speaker who has been working to positively prevent LGBT+ and identity-based prejudice in the UK education system since 2009. He delivers his award-winning training programme, Inclusion For All, to teachers, pupils, initial teacher training faculties and global businesses. He is an internationally recognised lead on LGBT+ inclusion in UK schools and his work has been recognised by the Department for Education, Ofsted and the Faith and Belief Forum. Shaun was named one of the most influential LGBT+ people in the UK today, resulting in him being honoured by the UK Prime Minister for services to education and LGBT+ communities in 2016. Shaun is currently leading the entire Isle of Man education system through the Inclusion For All programme and also regularly works with Amnesty International. He has written for The Huffington Post, The Guardian, TES, Headteacher Update, Teach Primary and Gay Star News. He is the author of Celebrating Difference: A whole-school approach to LGBT+ inclusion. The book was recommended in U.K. Parliament in April 2019 by Lord Cashman.