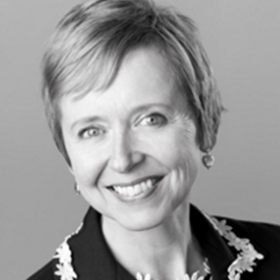 Rosie Millard OBE is Chair of BBC Children in Need, the BBC’s charity which every year helps bring happiness and transform outcomes for children across the UK. Rosie is also the Chair of Firstsite’s Board of Trustees. Firstsite embraces the transformative power of art to empower more people from all backgrounds to be creative together and lead healthier and happier lives. Firstsite forms part of The Arts Council England (ACE) National Portfolio.

From 2014-2018 Rosie Millard was the Chair of Hull City of Culture 2017, a £32.5 million programme which opened in January 2017. Darren Henley, CEO of  the Arts Council of England has called Hull’s year an “unmitigated, rip-roaring, awe-inspiring, life-enhancing success.” Being City of Culture has had a transformative effect on the Yorkshire city, achieving 90% engagement amongst its citizens, involving every single one of its 55,000 children and bringing in millions of tourists. Rosie was called upon to speak at a vast array of public events on a national level, championing Hull and its unique cultural offer in the national media including all the broadsheets, the Today programme, BBC News, Sky News, and ITV.

She is a Trustee of Opera North, which brings opera to communities and audiences largely (but not exclusively) across the North of England.

Her position as Chair of Hull City of Culture has involved extensive lobbying in the highest Government circles in order to raise the City of Culture’s profile and guarantee its success. She has argued for the social importance of inclusive and transformative culture at a senior level alongside politicians and peers. She has worked with a huge array of stakeholders both private and public, including the Arts Council of England, Hull City Council, BP and Yorkshire Water.

She has overseen not only the fundraising and good governance of Hull City of Culture but also its overarching programme and vision, founded in a belief of public service, and of high calibre culture accessible to all. Her aspiration is for a City of Culture  which is distinctive to Hull, which will embrace diversity, and which will profoundly change lives and outcomes.

Hull’s Learning programme engaged all the 55,000 young people and children in the city. This is no mean feat for a city with historically very low levels of cultural uptake and investment. So far Hull has achieved astonishing press coverage and support in every single area of the media. It has even gained a permanent position on the UK weather map.

Rosie was the BBC’s Arts Correspondent for a decade, following which she was Arts Editor of the New Statesman and profile writer at The Sunday Times. She has been an executive at the Creative Industries Federation, a columnist for the Independent, a feature writer across the broadsheets and a documentary maker on radio and television.

Rosie helps run the Second South Islington Brownies. She lives in London with her husband Pip Clothier and their four children. She runs a marathon every year and has ran all the Marathon Majors. Her PB is 3.48.