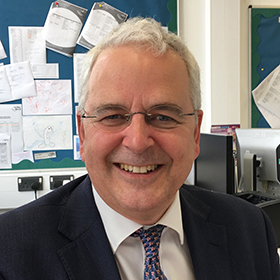 Paul is Executive Headteacher of Coastal Academies Trust, consisting of five schools in Thanet, Kent – one selective, one primary and three non selective secondaries, of which two are the most challenging in the south east. All of the secondaries are IB World Schools, only offering the IB Diploma or IB Carers-related Programme (IBCP) in the Sixth Form. The Trust has been at the centre of the expansion of the IBCP to 29 schools in Kent – by far the greatest concentration in the world. He is a passionate advocate of the transformative benefits of the IB and its value driven approach to education.

Paul has been an active NLE, supporting local schools in category and has long campaigned against the current practice of sending Looked After Children to the poorest and least safe parts of the country. He intensely dislikes Progress 8 as a measure to judge schools and has welcomed the new Ofsted focus on the central importance of the curriculum.