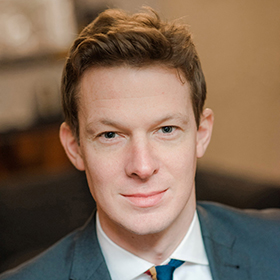 James is the Chief Executive of the Sutton Trust and has been in post since February 2019. Prior to that, James was Deputy CEO of the Trust’s sister charity, the Education Endowment Foundation. He also led the Trust’s £135m bid to set up the EEF in 2011, was its interim CEO and served as a founding Trustee.

James worked for ten years previously at the Trust leading policy, research and programme work, latterly as Director of Programmes and Partnerships. In this role he oversaw the foundation of the Trust’s US university programme, the expansion of the UK summer schools and Pathways initiatives, and the development of its pre-16 work through Sutton Scholars.
James is also a trustee of The Brilliant Club, the Centre for Homelessness Impact, and a governor of a comprehensive school in the East Midlands, where he lives.