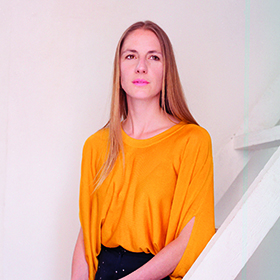 Dr Helga Schmid is an artist/designer, researcher and lecturer. She has worked as a researcher in the Architecture and Design department at the Museum of Modern Art in New York, and internationally as artist/designer on high-profile projects, including the Victoria & Albert Museum, the Royal Academy of Arts and the British Museum. Her work has been exhibited and featured in publications, blogs and magazines worldwide, such as the Whitechapel Gallery London, Dia Art Foundation in New York, Istanbul Design Biennial, Z33 – House for Contemporary Art, London Design Week and DMY Berlin. In 2018/19 she was a Designer in Residence at the Design Museum in London. She has received a number of international awards including the Type Directors Award, Art Directors Award, Best German Books Award as well as a Fulbright scholarship and two DAAD scholarships. Helga has a background as a communication designer, holding a postgraduate degree from the University of Applied Sciences in Augsburg, and a Master’s degree from the School of Visual Arts in New York.