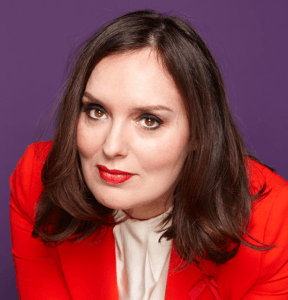 Summary: We are most ourselves where we feel included, with our best friends or family. We are most included where we feel we are with our “tribe”. It is easy to feel excluded or included only tentatively when we are in the minority. This means that if you’re in the minority because of gender, sexual orientation or race in the business world it can be easier to stay on the fringes of the action although your instinct, talent and ideas are telling you to get into the middle of the fray.

We know we need to “lean in” but how, when and can it be done with flair and charisma? Once you’ve included yourself, can you include others like a leader?  Deborah Frances-White, comedian and host of The Guilty Feminist podcast discusses how better to include ourselves, and include others.

Deborah Frances-White is a comedian and screenwriter. Her podcast THE GUILTY FEMINIST has had 85 million downloads in five years becoming something of a cultural phenomenon. “Essential for the planet” Emma Thompson “ ‘Hilarious, irreverent, eternally surprising, classy as hell, genius’ Phoebe Waller-Bridge, The Guardian. She has toured the show around the world including a sell-out show at The Royal Albert Hall in 2019.

The podcast won the 2020 British Podcast Spotlight Award and the 2021 PodBible Award. Her independent film SAY MY NAME premiered at The Leicester Square Odeon in 2019. Her new feature film MAKING BABIES is currently in preproduction with Redwave Films. Her live stand up storytelling comedy shows have been featured as specials for the BBC on Radio 4 as part of her Writers Guild Award Winning Series DEBORAH FRANCES-WHITE ROLLS THE DICE. She is currently recording her new BBC Radio 4 series – DEBORAH FRANCES-WHITE PRESENTS…. Her book THE GUILTY FEMINIST is a Sunday Times Bestseller. She has just been commissioned to write a new book – THE SIX CONVERSATIONS WE ARE TOO SCARED TO HAVE which will also be published by Hachette. She regular appears on television (Have I Got News for You, Mock the Week), radio and podcasts as a comedian and cultural commentator and her op ed pieces and interviews have appeared in The Guardian, The Telegraph and The New York Times.

Deborah is in demand as a keynote speaker and host, regularly delivering seminars on diversity and inclusion and hosting high profile events such as Stylist Magazines first ever Remarkable Women Awards and LinkedIn’s Talent Connect global conference . Deborah also works closely with Help Refugees raising funds and awareness and is an official Amnesty International UK Ambassador.