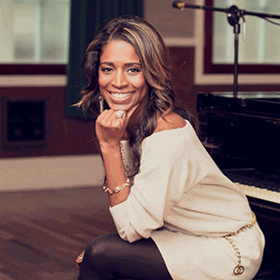 Often referred to as “The UK’s Vocal Whizz”, CeCe Sammy is a leading vocal and performance coach who works in London and Los Angeles. She is known for her TV appearances, on screen and behind the scenes contributions as a vocal coach, TV judge, advisor, talent scout and trouble-shooter on various music and entertainment shows.

CeCe’s successful career has led to her becoming the industry’s go-to vocal and performance coach, as well as become a major name in the global music industry. In 2016, CeCe was chosen to be the Chairperson of the UK Jury of Eurovision, the longest-running annual international TV song competition. Since 2017, CeCe has worked closely with the BBC, in part as Series Head Vocal Coach for BBC One’s ‘Let’s Sing and Dance for Comic Relief’, and also as a member of the development team creating the show ‘Pitch Battle’. She has most recently been Head Vocal Coach on the BBC’s new singing show ‘All Together Now’ pilot and series 1 as well as the BBC Two ‘This Is My Song’. CeCe has also been a member of the BRIT Awards Voting Academy since 2017 for her love of different genres of music.

CeCe’s on and off screen credits are phenomenal at events including interviews at the Grammy Awards, American Music Awards, E! Entertainment.